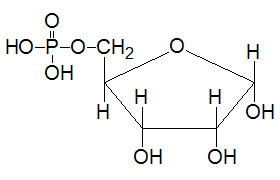 The predominant carbohydrates encountered in the body are structurally related to the aldotriose glyceraldehyde and to the ketotriose dihydroxyacetone. All carbohydrates contain at least one asymmetrical (chiral) carbon and are, therefore, optically active. In addition, carbohydrates can exist in either of two conformations, as determined by the orientation of the hydroxyl group about the asymmetric carbon farthest from the carbonyl. With a few exceptions, those carbohydrates that are of physiological significance exist in the D-conformation. The mirror-image conformations, called enantiomers, are in the L-conformation.

The aldehyde and ketone moieties of the carbohydrates with five and six carbons will spontaneously react with alcohol groups present in neighboring carbons to produce intramolecular hemiacetals or hemiketals, respectively. This results in the formation of five- or six-membered rings. Because the five-membered ring structure resembles the organic molecule furan, derivatives with this structure are termed furanoses. Those with six-membered rings resemble the organic molecule pyran and are termed pyranoses

Such structures can be depicted by either Fischer or Haworth style diagrams. The numbering of the carbons in carbohydrates proceeds from the carbonyl carbon, for aldoses, or the carbon nearest the carbonyl, for ketoses.

The rings can open and re-close, allowing rotation to occur about the carbon bearing the reactive carbonyl yielding two distinct configurations (α and β) of the hemiacetals and hemiketals. The carbon about which this rotation occurs is the anomeric carbon and the two forms are termed anomers. Carbohydrates can change spontaneously between the α and β configurations: a process known as mutarotation. When drawn in the Fischer projection, the α configuration places the hydroxyl attached to the anomeric carbon to the right, towards the ring. When drawn in the Haworth projection, the α configuration places the hydroxyl downward.

The spatial relationships of the atoms of the furanose and pyranose ring structures are more correctly described by the two conformations identified as the chair form and the boat form. The chair form is the more stable of the two. Constituents of the ring that project above or below the plane of the ring are axial and those that project parallel to the plane are equatorial. In the chair conformation, the orientation of the hydroxyl group about the anomeric carbon of α-D-glucose is axial and equatorial in β-D-glucose.

Glycogen is the major form of stored carbohydrate in animals. This crucial molecule is a homopolymer of glucose in α–(1,4) linkage; it is also highly branched, with α–(1,6) branch linkages occurring every 8-10 residues. Glycogen is a very compact structure that results from the coiling of the polymer chains. This compactness allows large amounts of carbon energy to be stored in a small volume, with little effect on cellular osmolarity.